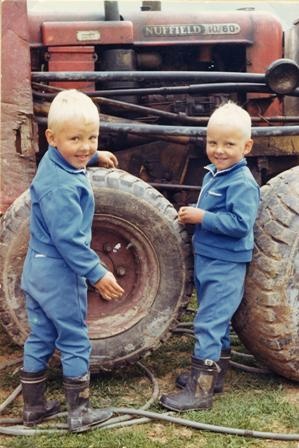 Finntwin16 is a family data collected as a twin follow-up study. Data collecting started between 1991 and 1995 when questionnaires were mailed to all Finnish twins born between 1974 and 1979 as well as to their parents. Twins were 16 years old at the time when first questionnaires were sent. Later questionnaires have been mailed when twins were 17, 18½ and 23 to 27 years old. Finnish Population Register Centre provided twins' contact information for the study.

If the sent questionnaire wasn't given back, a reminder was sent. If we still couln't get a reply, we either tried to contact the twin by phone or mailed a new reminder. Small gifts with information about the results of the study have been sent to those who participated. Motivating twins is important in a long-term follow-up study to keep the participation procents as high as possible.

A fourth wave of data collection was conducted in 2000-2002 and described in Kaprio J. Twin Research and Human Genetics  2006.

The fifth wave of data collection of the Finntwin16  cohort was done in May 2010 (a pilot study), October 2010 to November 2011 for Finnish speaking subjects and in the spring of 2012 for Swedish speaking subjects. The  invitation to take part in an internet survey was sent to all twins living in Finland irrespective of earlier participation. Twins who had indicated that they no longer wished to participate were naturally not contacted. Of the 6132 twins that we contacted, 4414 participated, a response rate of 72%.

The internet survey permitted us to tailor questions depending on answers to certain key questions. Thus, questions on their children were asked only for twins who indicated that they had children, items on nicotine dependence were asked only of smokers, and abstainers were not asked detailed alcohol items.  The balance of questions was between retaining items from earlier questionnaires to permit longitudinal analyses and including items of relevance to these twins now in their mid-thirties. We asked them about their twin relationships, study and work, general health, symptoms, selected specific diseases and reading disorders. Seven items on weight and weight changes were included. Ten physical activity items were asked. Then they were asked about their partners, whether they had children and some details about each child and intentions to have more children. Alcohol use and alcohol-related problems, diet and tobacco use were assessed. A short personality scale was included before asking about satisfaction in various life domains. Waist circumference was self-recorded using the tape measure supplied in the invitation letter.

After completion of the survey items, some respondents were asked to administer a net-based battery of neuropsychological tests on spatial ability, memory and reading speed.  Responses to these tests were obtained from 1391 twins.  Because many of the twins also had partners or spouses, we asked the twins to invite their partner to participate. This was done using a fully anonymous code, supplied in a closed envelope to the twin to be given onwards to the partner. Partner responses were obtained from 1948 persons, spouse pair responses (i.e. both twin and partner replied) from 1826 dyads.  Some of the partners were also asked to take the neuropsychological tests, and 710 did so successfully, with 677 twin-partner dyads. The study has received ethical committee approval.

In conclusion, the Finntwin16 dataset represents a rich longitudinal design and covers well the Finnish population.

Many articles and doctoral theses have been published from this study. Below are a couple of samples: