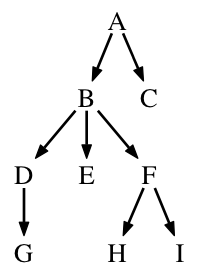 A stemma is often a tree, although occasionally loops are introduced in the graph (which will then become a DAG) in order to represent instances of contamination. It is customary to associate extant manuscripts with the leaf nodes, in which case the interior nodes represent extant ancestors (whose descendants are then codices descripti) or hypothetical lost manuscripts which may be unlabeled. Other interpretations of stemmata are also possible.