A scribe (from lat. scriptor 'someone who writes') is anyone who wrote the text of a handwritten document, whether from scratch, as it were, or by way of copying an exemplar. In antiquity there were professional scribes working in public libraries and in bookstores or for wealthy private persons who wanted to have certain texts copied. In the early and high middle ages the scribes were often monks or nuns working in a scriptorium of a monastery. In the late middle ages there were professional scribes who worked for bookstores, libraries, municipalities, courts, or universities.

While scribes usually were professional, there were exceptions to this rule. Sometimes scribes were people who copied a text for their own purpose. The scribe may thus have been, e.g., a professional who needed a technical handbook or someone who wanted to have access to a collection of sermons or to a literary work.

In most cases, the scribe copied an existing text, and would in this sense be a copyist. The copyists' attitude towards the text they were copying may have depended on whether they were professional scribes working for others or private persons producing their own copy of a certain text (cf. copying of texts). 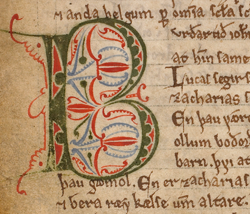 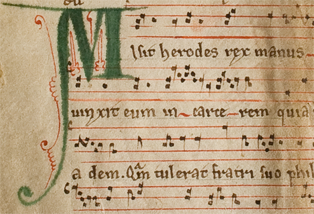 Figs. 1 and 2. Extract from two manuscripts probably written by the same scribe. Fig. 1 is from the Old Norwegian homily book (Copenhagen, AM 619 4to, fol 52v), dated to c. 1200–1225, and fig. 2 is from a fragment of a Latin liturgical manuscript (Oslo, NRA Lat fragm 1018), dated to before 1225. While scribes, especially in larger scriptoria, could be very specialised, they could also be very versatile. The scribe of these two fragments obviously was able to write in Old Norwegian and in Latin, to draw the initials (and the rubrics) himself, and also to add musical notation.