Over the course of time, many manuscripts were damaged, accidentally or intentionally, so that only parts of the once complete manuscript now remain. This process of fragmentation is so widespread that many works are only known to us in an incomplete state. The Old Norwegian translation of the Latin Barlaam legend, Barlaams ok Josaphats saga (mid-13th century), has been preserved in 15 Norwegian and Icelandic manuscripts, but all manuscripts, including the codex optimus Stockholm, Kungliga biblioteket, Perg 6 fol (ca. 1275), have some degree of fragmentation (cf. the edition by Rindal 1981). Even if all 15 manuscripts are collated, a small section of the text is missing in all manuscripts. The first editors of the text, Rudolf Keyser and Carl Richard Unger (1851), chose to reconstruct this section of the text on the basis of the Latin legend.

Fragments vary in size ranging from a major part of the manuscript to perhaps only a leaf or a part, even a minor part, of a leaf. The ultimate fragmentation is the complete loss of a manuscript (see the entry on loss rate of witnesses). Different fragments of a manuscript may have ended up in different libraries today, and they may thus have different signatures. For example, the manuscript containing the Old Norwegian translation of the Old French lais by Marie de France, Uppsala, De la Gardie 4-7 fol, at one time lost a quire, which later turned up as the lining of a bishop’s mitra on Iceland, and it is now known under a new signature as Copenhagen, AM 666 b 4to. 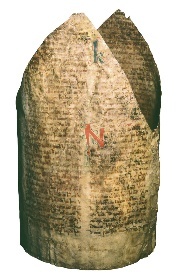 Fig. 1. The fragment of Strengleikar, now Copenhagen, AM 666 b 4to, showing how it was cut to be used as the lining in a mitra. The rest of the manuscript came to Sweden and is catalogued as Uppsala, De la Gardie 4-7 fol.

Certain types of manuscripts have been especially prone to the process of intentional fragmentation. After the Reformation in 1536, almost all Latin liturgical manuscripts in Norway were destroyed, so that only 15 Latin manuscripts, mostly liturgical, have been preserved out of several thousand (Haugen and Ommundsen 2010, 29–32). Many manuscripts were in fact cut up in small pieces and used as binding material in books. 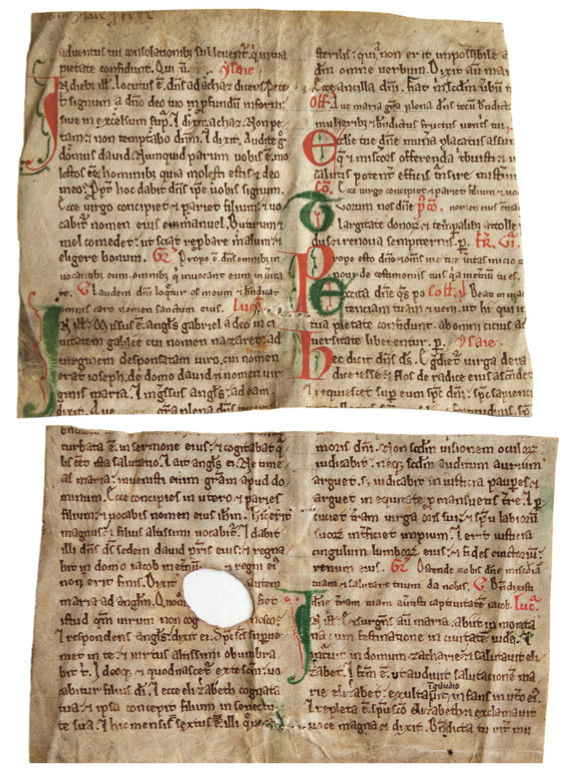 Fig. 2. These two partially preserved leaves (Oslo, NRA Lat fragm 764, fol. 1–2v) are all that remains of a liturgical manuscript kept in Norway, cf. Ommundsen (2010: 133). Note the large hole in the parchment in the lower fragment. The text continues unbroken on the other side of the hole, so it must originally have been in the leaf. It is thus not an example of a lacuna, which is the result of later damage to a manuscript.