An exemplar is a text which has been transcribed in a copy or apograph. The exemplar may have been copied by visual inspection by the copyist or by way of dictation of somebody else (cf. copying of texts - methods).

In a stemma, an exemplar is always placed immediately above its copy. In fig. 1, the hyparchetype B was the exemplar for the fragments β and γ, which in turn were exemplars for the main manuscript (“hovedh[åndskriftet]”), which in turn was the exemplar for Y, which finally were copied in e, n and hIII. Note that due to the procedure of eliminatio codicum descriptiorum, many copies are simply removed from the stemma. The example here is a little unusual, and can be explained by the fact that the fragments β and γ are the modest remains of a once complete manuscript. If this had been preserved in a complete state, the copies below would have been removed in the elimination procedure, and this manuscript would have become the main manuscript. 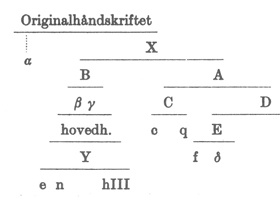