A leaf in a graph is a node with indegree one and outdegree zero, or in the undirected case, degree one. 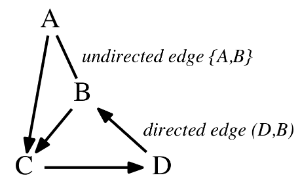