A codex interpositus (plural codices interpositi) is an intermediary manuscript located between two manuscripts in the stemma. If a codex interpositus is lost, its existence may be postulated in some cases (e.g. when a witness is assumed to derive from a less corrupt model). For example: in his edition of the Old English text known as Soul and Body, Douglas Moffat (1990) gives the stemma provided below, where E and V are the extant witnesses, Z, Y, and X the lost ones. X is a codex interpositus (though not a hyparchetype) which, according to the editor, should have cointained the episode of the “holy soul” present in its apograph V but lacking in E. 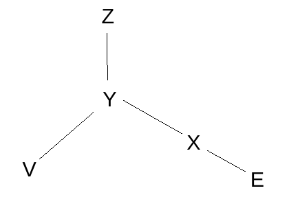 Note that one needs to have at least two extant copies in order to identify a lost intermediary, and many more manuscripts may have been lost on the way without leaving a trace (if they lead to zero or one descendant(s)). Those “ideal / theoretical” lost intermediaries can sometimes (although rarely) be corroborated in reality if their extant copies share mistakes which can only be explained by material accidents (Irigoin 1986), or by the type of script used in their common ancestor (Timpanaro 2005, Appendix B, 145-156).